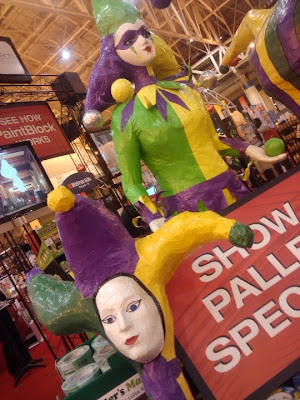 Every so often, but not often enough, life requires me to venture to New Orleans. This past week, Mike nad I headed south for an Ace Hardware convention. (It’s a long story, but suffice to say that Mike is interested in opening a hardare store in Seattle.) It’s safe to say that on the surface, I don’t dig conventions. The food is generally abysmal and I’m not keen on the whole herded-like-cattle aspect. But secretly, I get all nostalgic thinking back to my first conventions in the mid-1990s. (I fondly recall Milia in Cannes, France, in 1995. CD-ROMS were the big news then…)
The primary goal of the hardware convention is to get store owners to buy stuff. So, three of the grand halls at the New Orleans convention center were packed to the gills with every possible thing you could feasibly find under the roof of a hardware store, from the requisite hammers and nails to a field of faux Christmas trees. The paint area was highlighted by a pair of jesters made out of varying colors of painters tape. I spent two hours in the kitchen area, weighing whether being tied down to Seattle was worth acces to wholesale Le Creuset cookware.

Weary from it all, we had to eat. First, we dined at August, the home of celebrity chef John Besh. John wasn’t around, but we did meet his marvelous executive chef. With shining, dark paneled walls and weighty chandeliers, August defines southern elegance. We both chose the five-course tasting menu with wines to match. The strong line up started with a creamy cauliflower soup studded heavily with lobster roe, and shifted into a hearty yet complex veal dish with spring onions atop local greens.

The next afternoon, free of the convention, we hung out in the French Quarter. From our perch at Johnny White’s on Bourbon Street, we watched the scene below. Right at 6 p.m., a guy dressed up as a giant hand grenade started his shift outside the the Tropical Isle bar, promoting their signature drink. We watched as people embraced him in photos and, occasionally, punched them as hard as they could. The poor guy. I’m so glad that I don’t have to work as a grenade. Our last meal was at Le Foret, an elegant, new restaurant in the Central Business District. Like August, it’s a white tablecloth affair with servers adorned in ankle-length aprons who reflexively call everyone “sir” or “ma’am.” We wanted sazeracs, and since our server and the bartender couldn’t agree on the superior way to make one. Rye whisky with absinthe or Maker’s Mark with herbsaint? So he brought us a version of each.

From there, we had more cauliflower soup, this time a slightly more delicate variation studded with lobster and topped with just a hint of caviar. Mike ordered the tasting menu which had a serious standout item: a foie gras “soup” with layered with gruyere. Think French onion soup, but with foie gras. The lush, soft texture of the liver paired with the salty unctuousness of the cheese was arguably one of the best things that I’ve tasted in the past couple of years. In fact, I barely remember the rest of the meal other than it was all good. I’m not sure if that’s due to the fabulousness of the foie gras dish or that we started dinner with double sazeracs.

We headed home early hoping to catch relatives who ventured over to Seattle from Spokane. Even though we changed our flight to arrive four hours early, they left just as we arrived, leading us both to wonder: Why didn’t we stay? Did I mention that it was Pirate Week in New Orleans?